By adding ExitGadget to their website, Fred Martin Superstore has consistently generated an average of 140+ additional leads per month for the last 60 months consecutively.

Fred Martin Superstore is a Chrysler, Dodge, Jeep, Ran and Fiat dealership located in Barberton, Ohio. Owner Adam Huff’s goal is to ensure value, quality, professionalism and customer service to anyone buying a vehicle, new or used, or servicing their car at his establishment.

The Fred Martin team was looking to increase the number of actionable leads their BDC was receiving without having to spend more on their marketing. They were also looking for a way to persuade their audience that they were the dealership to shop with.

After recognizing that they weren’t receiving quality leads form their Facebook lead ads and had no interest in increasing their ad budget yet again in hopes that their issues would resolve themselves— the Fred Martin team reached out to ExitGadget.

Illuminating the fact that your most qualified prospects are those already on your site, we showed their internet team how our technology incentivizes customers to stay right where they are while obtaining their contact information and immediately adding it their CRM— so the internet sales team has an opportunity to connect with visitors otherwise unknown and untracked.

From the first month we added ExitGadget to fredmartinsuperstore.com, the dealership has seen on average an additional 100+ leads per month, with some months well exceeding that average, since 2014! But our software didn’t just generate them high quality leads— it did so for HALF the cost of their other third-party lead providers; generating more success and more cars sold for Fred Martin Superstore.

Trending in the direction every business owner is hoping for, Fred Martin Superstore has seen a marked increase in leads generated by their ExitGadget over 2019! While some industry pundits will tell you certain lead generators don't work, or don't bother with that, or ExitGadget is only a pop-up - Fred Martin chose to disagree and ExitGadget paid off in 2019 for their dealership. Through the last year, Fred Martin has generated an AVERAGE of 357 leads per month with their ExitGadget. 357! What's evern more impressive is rather than dying out later in the year, leads from ExitGadget actually INCREASED as the year went on! August - December 2019 averaged well over 400 leads per month! Can your "just a pop-up" do that? ExitGadget can! 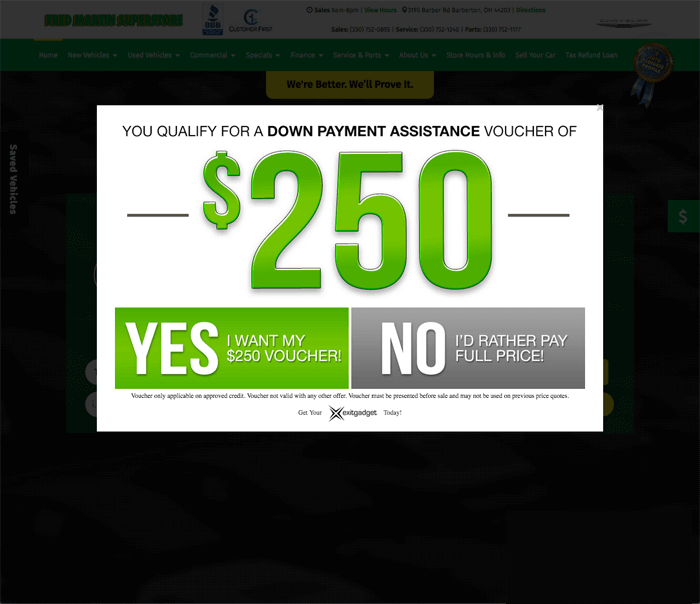 Toyota of Easley generated 136 leads and increased trade-ins by 42% for November 2018 with ExitGadget.

Toyota of Easley is a high-volume dealership located in Easley, South Carolina. They have been recognized by the likes of Toyota USA for their unique and modern marketing tactics.

Looking to clear out their 2018 inventory, Toyota of Easley wanted a way to ensure they were doing all they could to get their sales team on the phone with potential customers.

The team at Toyota of Easley knew their best chance at generating 2018 model sales was by engaging those already shopping on their website. After researching various exit-intent softwares, they found ExitGadget and gave us a call.

After reviewing their needs, we suggested our KBB Value-Trade gadget. It provides an incentive of up to 120% of the Kelley Blue Book value for trade-ins and lets visitors click to assess their current vehicle value. By filling out the form provided in the ExitGadget, each potential customers’ contact information was sent directly to Easley’s CRM. It also provided a point of entry in terms of sales conversation for their staff.

Toyota of Easley was able to exceed their sales goals for November and received a 42% increase in trade-ins for the month. 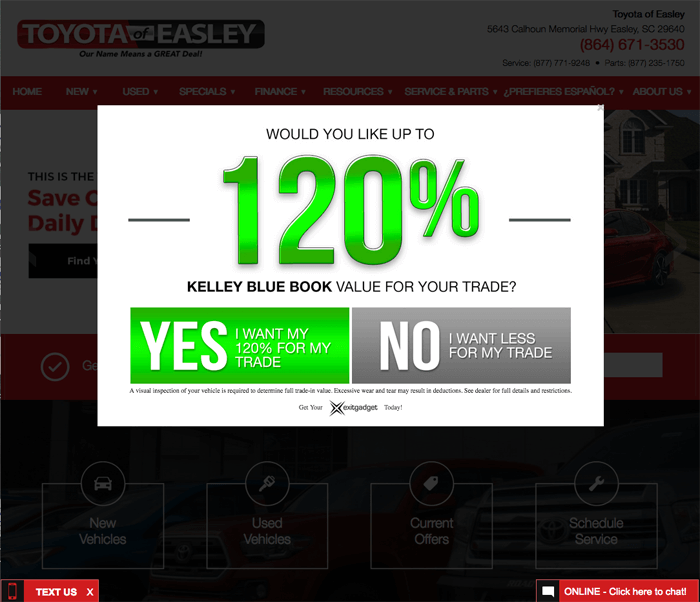